Want to be part of this fun new series? Here's what Aaron has to say about his inspiration:  "How old were you when you started playing some form of baseball? Are there pictures of you as a ball playing kid in the family album? If so, please join us in a little project we're calling "Ballplayer for Life". Take a photo of how you look as a ballplayer today, perhaps mimicking a photo of you as a kid. Send them to Board Member, Gary Bingner. He'll format it like the stories below and post the results right here. We'd all like to see how your passion for the game has burned brightly over all these years.
So start digging through those old photos!"
A photo/essay series, led by Aaron Isaacs 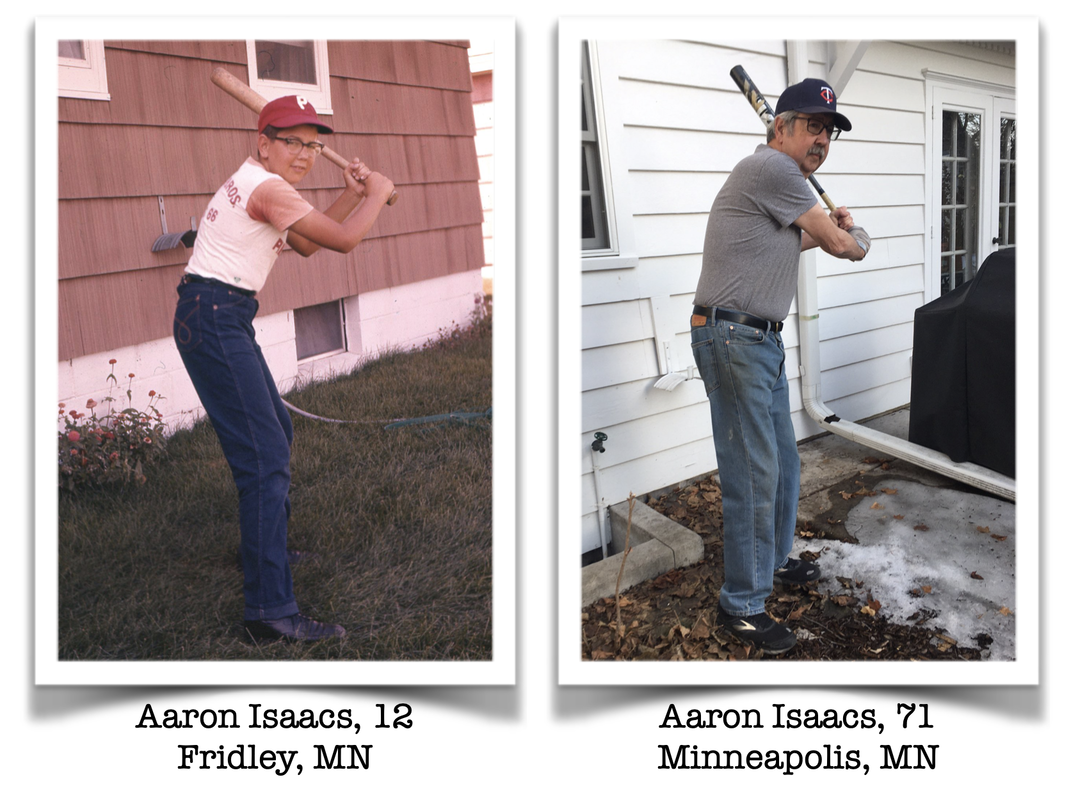 “The photo is from my second year of Little League, but I really learned to play in neighborhood sandlot games and lots of 500 in the middle of the street. I was crazy for baseball from about age 7. Collected and traded baseball cards and memorized every player's stats. It won't surprise anyone in the league to learn that 1st base was always my position.

We lived in Beloit, Wisconsin from 1956 to 1958 and the Braves were my team, winning the World Series in 1957. Because I shared a name with Henry Aaron he became my favorite player.

I love senior softball. It has completely changed how I view aging, because we can do a lot more than I ever thought possible. I experience things on the field that I can't get anywhere else. It's mysterious and wonderful how muscle memory takes over and you're able to run down a fly ball or throw accurately (well, not always, but often enough to feel pretty good about it). 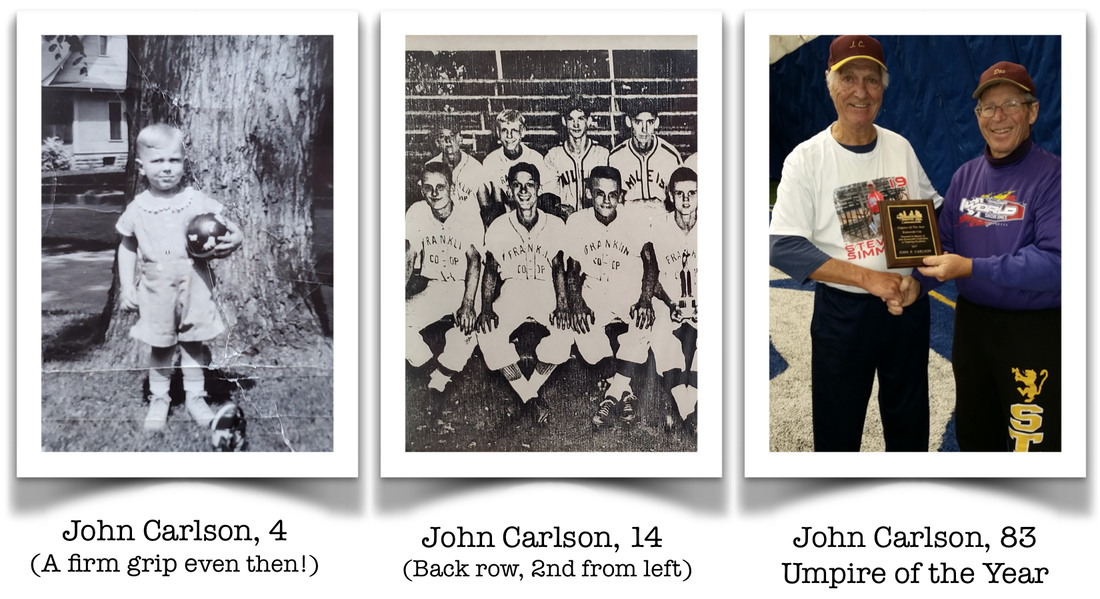 "Finding a broken bat and putting it together with a screw. Using a baseball with half the cover missing. Slamming a ball against the steps, etc, etc, etc. It sure was great being a youngster. No TV sets, just being at the park everyday was the normal.

My early teens brought me my first baseball championship with Franklin Creamery (picture). Maturing and playing baseball during my high school years, I turned to softball following graduation. A neighbor of mine became a terrific fastpitch pitcher, and he would practice every day. I was in awe of him.

In the forties and fifties, every bar, church & workplace sponsored teams. I started at age seventeen and have now played for (Yes) seventy straight years. Even during my time in the Armed Services, I played and pitched for the 82nd Airborne in North Carolina. I was shipped-out to Korea following the war, where I pitched for the eighth Army until my discharge.

Back home, I played fast pitch for thirty five years until the leagues disbanded in Minneapolis with the growth of slow pitch. I was fortunate to be one of Edina Senior Softball’s first players starting at age fifty five. From 1989 to the present, I have never missed a year of playing. Counting my fast pitch days, I have played from 1953 until today without missing a year.  Unfortunately, The Guiness Book of World Records told me they could not put me in their record books because there were too many players worldwide playing softball to enable them to verify this record of participation.

I am proud to have been competitive in West Metro over so many years. So many travels, world and other tournament championships, rings, and now most of all, enjoying the camaraderie with all of you."
--John Carlson, West Metro Senior Softball 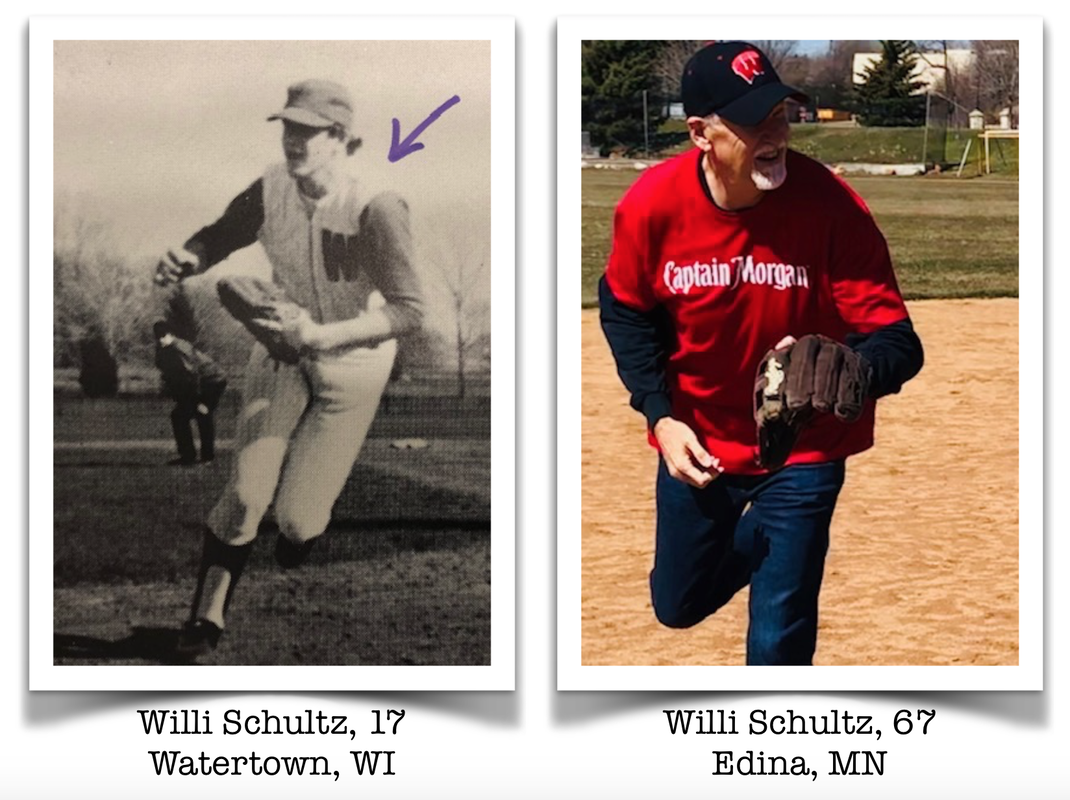 ​My love of baseball began with my grandmother. One of her pastimes was listening to radio broadcasts of Milwaukee Braves games. She even kept a scorebook as she listened! She also subscribed to Street and Smith’s Baseball magazine, and when I was at her house, I spent a lot of time looking at all the photos, reading about the ballplayers, and dreaming of being like them some day.
She took me to my first major league game when I was about 8. Warren Spahn started game 1 vs the Cardinals. But what I remember most was being in the parking lot in the bottom of the 8th inning of game 2 of the double header (because Grandpa wanted to beat the traffic!) and hearing a loud roar from the crowd. Yup- I had missed seeing Henry Aaron, my idol, hit one of his 755 home runs. Never quite forgave Grandpa for that!
I had a suitcase full of baseball cards, many of them much older than I was. Unfortunately, my mom threw them out when I was at college, not knowing what they may be worth some day. (I try not to think about it!)
While I did play little league, I have no pictures. My parents had to operate the farm and didn’t have time to watch games in the summer. I generally rode my bike the 6 miles to the fields in town.
So, the first photo is a newspaper clipping from my junior year in high school. I hit 5th and played 1st base on a good team that came within 1 inning of going to the state tournament in the large school division.
I just moved to The Cities in 2019 and discovered WMSS in July of 2020. It had been over 20 years since I had played, and it felt great to get back on the field. What a great organization! I look forward to the post-game socializing that apparently was routine before COVID, and I hope to get to know more of you better. Being new to the area, I need to make new friends, and COVID has slowed that process. 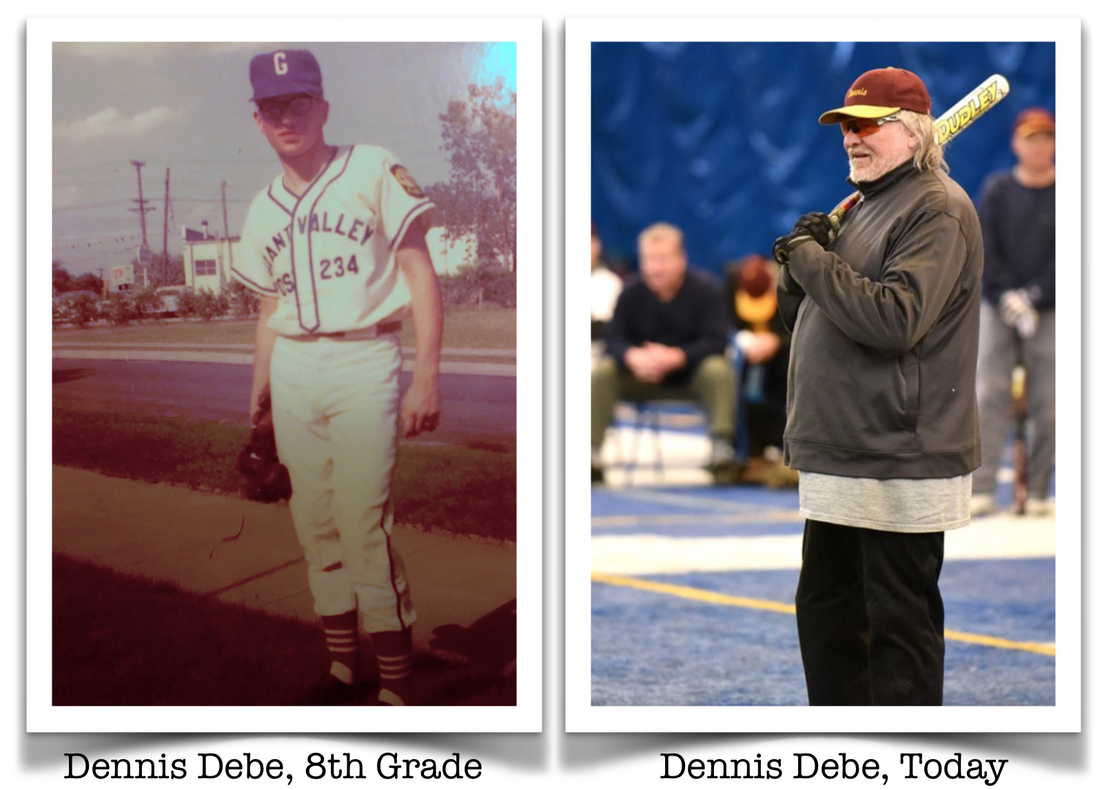 "My first was a 6 team little league at Lake Hiawatha of 7-8 year olds. Teams got different colored t-shirts and we thought that was pretty cool! Our 5th grade coach got a sponsor and full flannel uniforms! Really HOT! Then Jr. American Legion, Legion, and High School ball. All fun and many learnings! But most important were the “games” played at a small diamond on the corner of Crosby Place and 34th Avenue So. in Minneapolis. As people showed it’d be “Over the fence”, or “500” -points for fielding grounders and fly balls. When a 5th showed it went to “pitcher’s hand” with an infielder, a outfielder, pitcher and the hitter could only hit to one field! People were out by getting the ball to the pitcher or by being tagged running bases. When safe, a “ghost runner” and bat again! Keeping track of scores in the dirt and some people were so good (or our fielding so bad!) we had to limit them to 7 runs a time even before they had their three outs! Usually we had 6-9 per side for a real game with rules modified to “work”! (Sometimes 3 teams of 4 players so there were 8 in the field and ya got to bat more.) We played some kind of baseball from 3-9 hours a day all summer and mourned when it rained. Softball really started when I was 14 and my brother, who was always running some kind of team or another, was always short a player, so would enlist me to “fill-in” when needed-which turned out to be most every game! Never missed a season until last year! Broken legs, knee and wrist surgeries never cost a whole season! The people, the contact, the joy of playing are all things I look forward to reestablishing in West Metro senior ball—almost like being a kid again where it is “ok” to get dirty, dive around, and face the challenge of each separate pitch or batted ball, succeed or fail, and still grin at the effort! The joy of play! The “puppiness” that even we “old men” still carry!"
​    -Dennis Debe 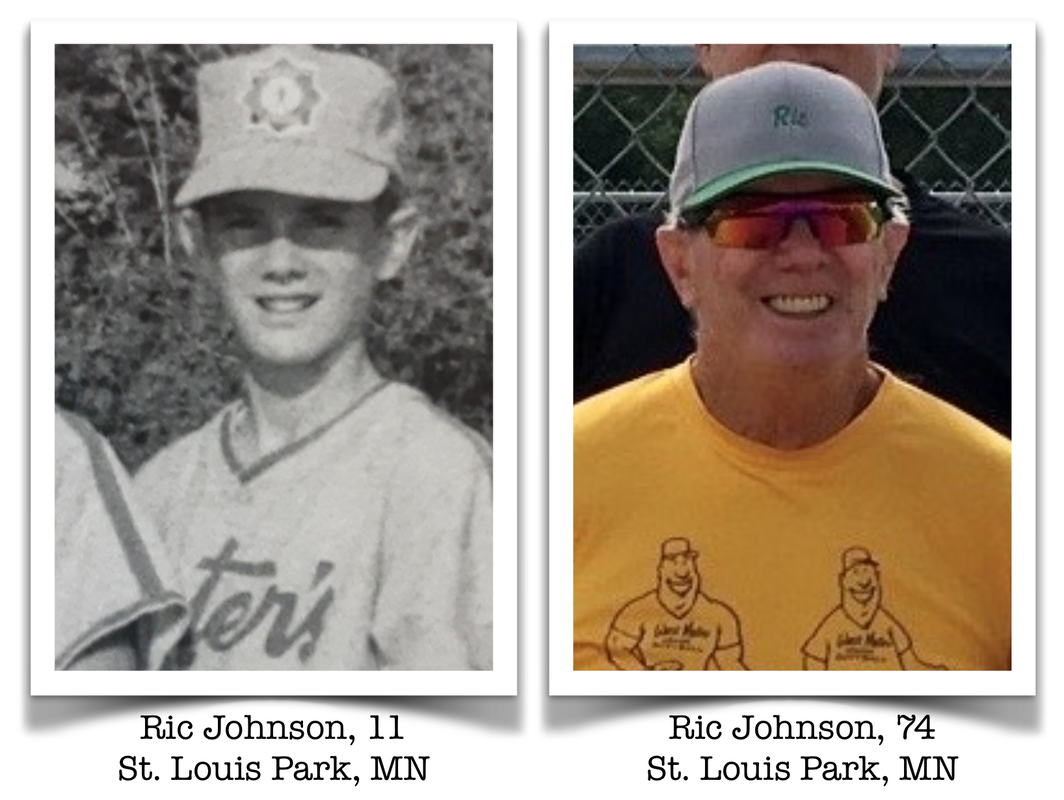 I have always said that if I ever can pass a softball field without getting butterflies I would quit playing.  That hasn't happened yet."   -Ric Johnson 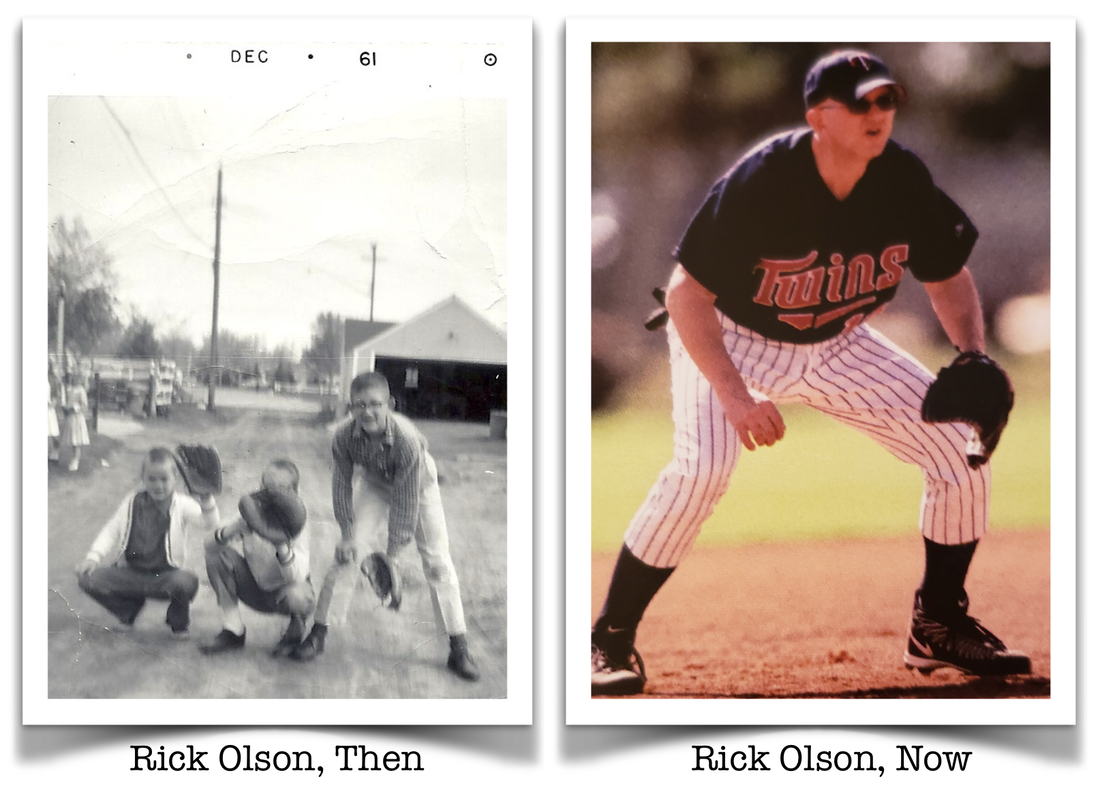 "As a kid we played pickup baseball in a vacant field at the intersection of Hwy 110 and County Rd 81. At that time it was a stop light intersection. The field was taken over by the current overpass intersection.  We would all show up on Mondays with our push lawn mowers and mow the infield. If you hit the ball into Hwy 100 it  was an automatic home run. Playing the game brings back the joy of being a kid and the friendships and comaraderie that will last forever."
- Rick Olson 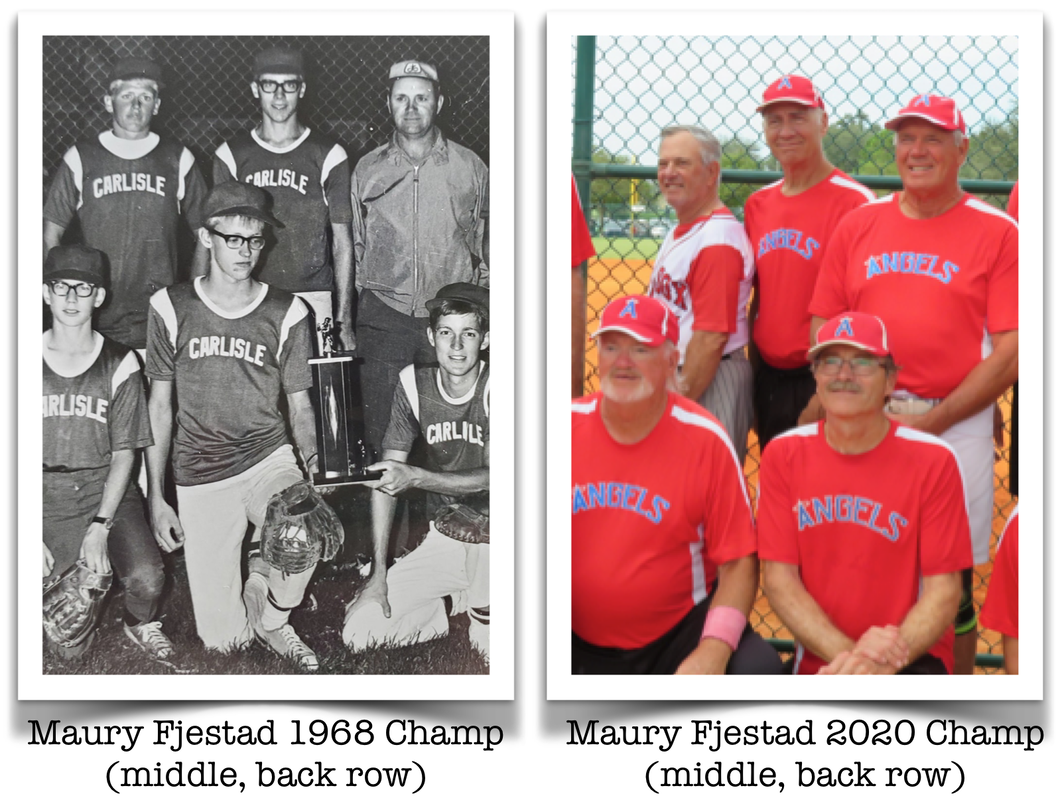 "I began playing in a softball league when I was 12 and haven't missed a year since, now I'm 69.
While everyone has a technical, musical, educational, etc. skills, you put those aside and show this unique skill set. To hit, catch and throw.  As seniors, you try to stay healthy to get back out on that field and enjoy the team comaraderie."     -Maury Fjestad 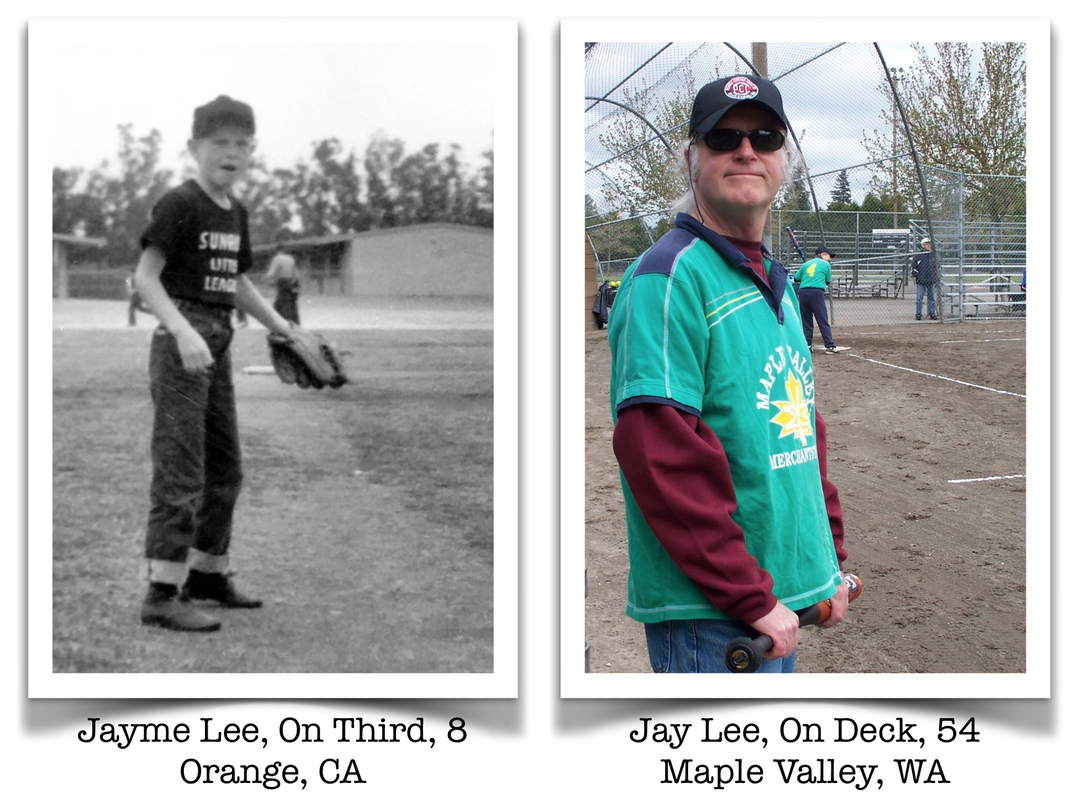 Growing up in Southern California my 8 year old mind fully expected to play for the LA Dodgers when I grew up. However, my 3 seasons of Little League turned out to be the last organized ball I would play for the next 45 years. In Spring of 2008 I visited my sister in the Seattle area. She and her husband had signed up to play Senior Softball in a CoEd league and their first game was on the first morning of my visit. I went along with them expecting to just be a spectator. The manager saw me and asked when I would turn 55 and if I had played ball. When I replied "June” and “third base in Little League..." he said I could join the team immediately for $45 and a signature! Amazingly I played a crazy good game at third base that day, leaping and snatching line drives high over my head, and picking hot grounders clean and firing strikes to first. Also I batted 2 for 4 with a double (which admittedly is not too hard to to do against senior coeds.) When I got back home I did a web search for senior softball in the Minneapolis area, but I got no hits. I’m guessing the WMSS website had not been established yet. More than a year later a conversation at my mail box with my neighbor John Hill lead to a connection with West Metro Senior Softball. I’ve  been a player and a fan ever since.  -Jay Lee